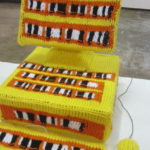 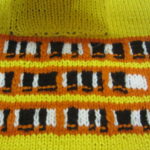 2       Computer language is based on Binary Code. Binary numbers make use of only 2 characters, on and off, 1 and 0.

3       In a similar way knitting is a binary system based on 2 stitches, plain and pearl with combinations and variations of these 2.

4       I have translated text into binary code and developed a binary code knitting pattern using white for plain and black for pearl, covering a computer, monitor, keyboard and mouse.

5       Ada Lovelace, daughter of Lord Byron was the first computer programmer. She met inventor and mathematician Charles Babbage and watched him demonstrate a model portion of his difference engine when she was 17.

6       Ada published extensive notes about Charles Babbage’s Analytic Engine in 1843. She also translated an article written by an Italian military engineer into English about this theoretical analytical engine. Her notes, published in 1843, were 3 times as long as the original notes.

7       Ada who designed a flying machine when she was only 12 years old wrote of how this machine could be programmed with a code to calculate Bernoulli numbers, which some consider to be the first algorithm to be carried out by a machine and thus the first computer program.

“Supposing, for instance, that the fundamental relations of pitched sounds in the science of harmony and of musical composition were susceptible of [mathematical] expression and adaptations, the engine might compose elaborate and scientific pieces of music of any degree of complexity or extent.”

8       Ada’s contributions, originally published in 1843 weren’t recognised until a century after her death when republished by B.V. Bowden in 1953.

9       Walter Isaacson wrote that Ada “[made] the conceptual leap from machines that were mere calculators to the ones that we now call computers.”

10     Many women involved in the early days of science and computing have been largely written out of history. Six women originally programmed ENIAC, the first programmable computer in 1946, but when the computer made its debut in the press, they were not introduced.